Skip to content
To Whom This May Concern Uncategorized February 3, 2020 3 Minutes

this is a great and important piece by Stephen Lendman.  Please read and share: 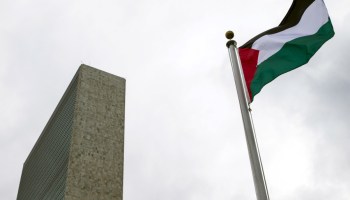 US veto power prevents adoption of a SC resolution that upholds their rights under international law.

By invoking General Assembly Uniting for Peace Resolution 377 (1950), SC actions can be overridden by a two-thirds majority vote of UN member states.

This step if taken and adopted by the GA cannot be overturned by SC veto.

GA Res. 377 can be invoked immediately by a UN member state at times when SC members fail to act as required to maintain international peace and security.

The State of Palestine exists — on the one hand as a PLO-represented observer state.

More importantly, the PLO  adopted the Palestinian Declaration of Independence on November 15, 1988 — drafted by Law Professor Francis Boyle, its legal advisor at the time.

He explained that Palestinian statehood is “determinative, definitive, and irreversible,” adding:

As the League’s successor, the General Assembly has exclusive legal authority to designate the PLO Palestine’s legitimate representative.

The Palestine National Council (PNC) is the PLO’s legislative body. It’s empowered to proclaim the existence of Palestine.

According to the binding 1925 Palestine Citizenship Order in Council, Palestinians, their children and grandchildren automatically become citizens.

So do diaspora Palestinians.

Those living in Israel, Jordan, and elsewhere have dual nationalities.

According to the following characteristics, Palestine qualifies for world community recognition as a de jure UN member state — with all rights and privileges of other world body members:

It’s territory is determinable even though not necessarily fixed, its borders negotiable, the state comprised of the West Bank, East Jerusalem and Gaza — where Palestinians have lived for thousands of years, deserving legal recognition of sovereignty over their homeland.

Palestine has a fixed population and functioning government. It supports peace, stability, and cooperative relations with other nations.

It accepts UN Charter provisions and can administer them on their own, along with the ability to establish diplomatic relations with other states.

Palestine fully qualifies for world recognition as a UN member state. If gotten, it can render Trump’s no-peace/peace scheme stillborn.

The General Assembly has sole UN member state admission authority, not the SC.

By invoking GA Res. 377, Palestinians can petition the General Assembly for de jure recognition as a UN member state.

Yet Israeli installed Palestinian president Mahmoud Abbas never took this step and is highly unlikely to go this route ahead — why new leadership is essential to pursue fundamental rights Palestinians have been long denied.

Francis Boyle earlier predicted that Palestine “would eventually achieve de jure diplomatic recognition from about 130 states” if its leadership formally seeks it.

He prepared the roadmap for its recognition as a UN member state — by “invok(ing) the UN General Assembly’s Uniting for Peace Resolution…to overcome US vetoes at the Security Council.”

Never taken before, now is the time to go this route in the wake of Trump’s annexation scheme.

Separately I said united under new leadership there’s hope for Palestinians. Divided under traitors in Ramallah serving Israeli interests as its enforcer there’s none.

If followed by invoking GA Res 377, General Assembly UN member states can override the SC veto as explained above.

Mansour said no “Palestinian official will meet with American officials now after they submitted an earthquake, the essence of it the destruction of the national aspirations of the Palestinian people.”

Israel’s UN mission said it’s working to thwart (Palestinian) efforts, and will lead a concerted diplomatic campaign with the US.”

Palestinians have a choice. Invoke GA Res. 377, seeking a two-thirds UN member state majority for their rights or face continued subjugation under Israel’s repressive boot — fully supported by the US and West.

Visit his blog site at sjlendman.blogspot.com.

The original source of this article is Global Research – https://www.globalresearch.ca/legally-overriding-us-security-council-veto/5702518

Published by To Whom This May Concern

This is a text widget. The Text Widget allows you to add text or HTML to your sidebar. You can use a text widget to display text, links, images, HTML, or a combination of these. Edit them in the Widget section of the Customizer.
%d bloggers like this: